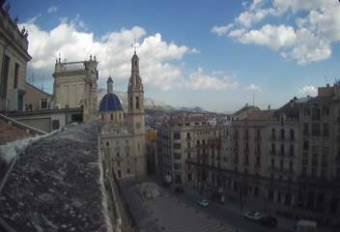 This is a webcam showing Plaza de Espana, Alcoy, located in Spain. The Plaza de Espana, in Alcoy ( Alicante ), Valencia is one of the most central and emblematic public spaces of the city. The Alcoy city council commissioned the Valencian architect Santiago Calatrava to remodel the square, in which he designed a multipurpose underground room, the Lonja de San Jorge, which was inaugurated in May 1995. In this square you will find some of the most outstanding monuments of the city, such as the Alcoy Town Hall , the Lonja de San Jorge designed by the architect Santiago Calatrava , the Church of Santa María or the Calderón Theater . You can also access the emblematic Plaza de Dins from there.